A day with a Waimarama Māori Elder

A day with a Waimarama Māori Elder 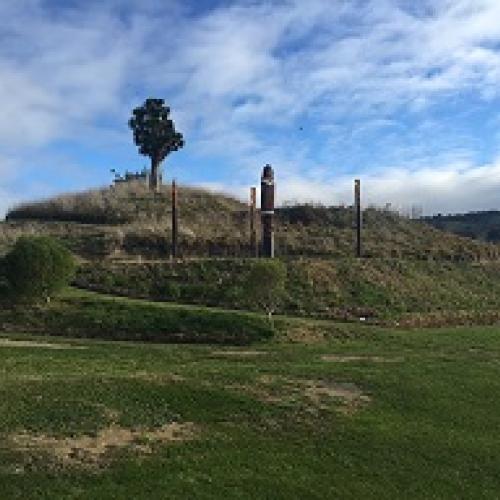 Growing up in Hawke’s Bay, I’ve been privileged to have spent many summer holidays at Waimarama Beach – memories of body surfing the waves, walking along the beach to see how far we could get (I still haven’t quite done the whole length – it’s long!), ice cream cones dripping down my hands faster than I could eat them, and sitting around with fish and chips from the only store at the end of the day are some of my enduring childhood (and adult) memories.

So it was with some excitement that NZ Māori Tourism helped to host the Vice-Minister from Peru recently, and part of that included time with Robert MacDonald and Adele Mohi-McGoverin from Waimarama Maori Tours.

Robert, his family and his ancestors grew up in Waimarama, an idyllic beach side village about 30 minutes south of Hastings.

Unfortunately, the Hawke’s Bay weather didn’t quite live up to its reputation, as Tāwhirimātea (God of the wind and storms) was out in force, but thankfully Ranginui (Sky Father) was doing his best to provide us with some warmth.

Robert and Adele took us first to the beachfront, to talk to us about Motu-o-Kura Island which we could see a few kilometres offshore. I’d grown up calling it Bare Island – so named by Captain Cook as the side you can see from the mainland just looks like bare cliffs rising out of the sea. However, I am reliably informed that the other side is not so bare – hopefully one day soon I’ll be able to see that for myself. 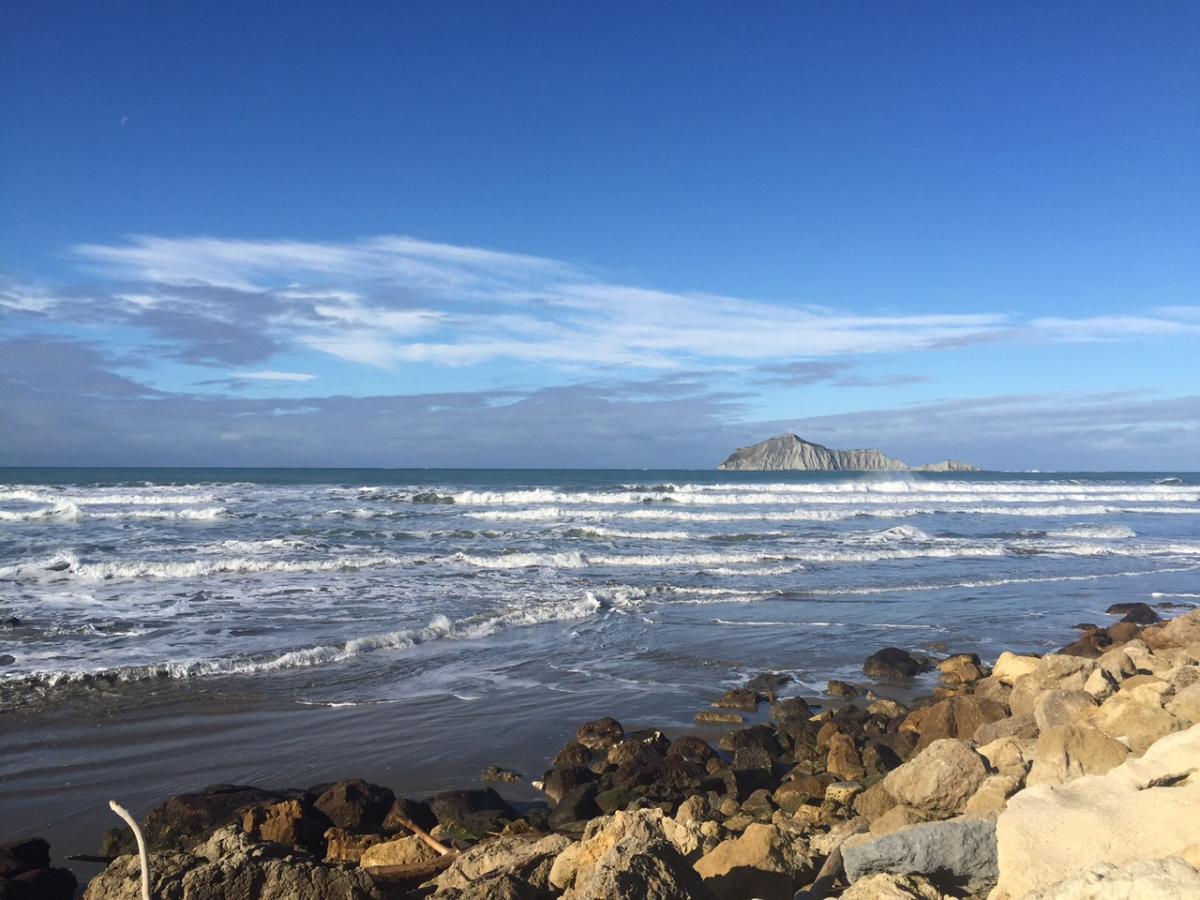 Next we were taken to the sacred site, Hakikino. Robert had the Vice-Minister in his car, while I followed behind with Adele who provided a commentary – it was a bit of a test of my off-road driving, and I like to think I aced it! The stories from Adele flowed freely, as did our questions which she answered adeptly.

On the way up to Hakikino we passed several pa sites – admittedly, you can do this around the country but there is a tendency to drive past without stopping to think about what they actually signify, and their place in our country’s history. I’ve been guilty of that in the past, but learning more about them from the people I’ve met around Aotearoa has given me a greater understanding and respect for our local history. Imagining the communities that lived at the pa; how they lived, housed, clothed, entertained, and fed themselves from the surrounding taiao (environment) .

Rounding the corner, Hakikino loomed in front of us. Learning that the pa tu watawata (fortifed pa) and its terraces had all been carved and shaped by hand gives you such an appreciation for the effort that went into living here – no popping down to Bunnings for the tools they need, or Hire Pool for the big land-shifting machines, that we have today.

Robert and Adele welcomed us on, and as we sat we were given blankets to protect ourselves against the wind – a lovely touch. Robert gave his mihi, even mentioning the neighbouring farm dogs who could be heard barking the sheep around in the paddocks over!

During our conversation, Robert and Adele told us more about what life had been like for their ancestors, and what life is like now. We felt the comfort and protection of the pou, as they stood guard over us.

The local hapu have been nurturing a native plant nursery, and the Vice-Minister was privileged to be asked to plant a young Kahikitea tree to commemorate his time in Waimarama. 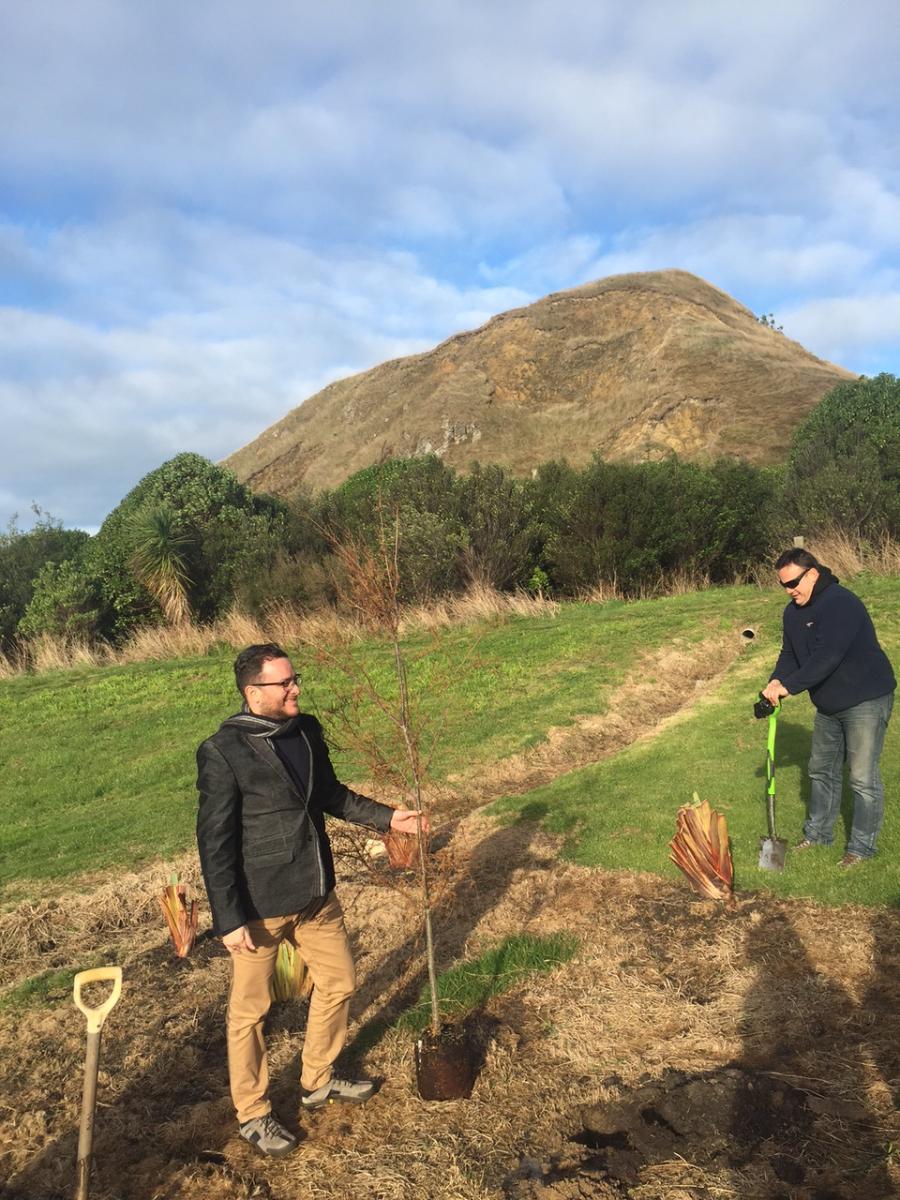 Next, we were able to visit Waimarama Marae to view some of the art work that was there, including tukutuku panels and painted pieces. Robert even pointed out the one that he had created!

Up to Robert’s 100+ year old family cottage for afternoon tea, we were ushered into the lounge (where Robert had thoughtfully lit the fire before our excursion so it was cosy on our return) for a final korero.

The portraits on the walls showcased several members of Robert’s family and my goodness, they were stunning. His ancestor Harawira Mahikai Te Tatere had pride of place on the mantlepiece – a man you could not take your eyes off as you took in his moko (facial tattoo).

We questioned why he was bearded by none of us guessed the $64,000 answer.

Which was, that the Christian missionaries found the tattoos offensive. Perhaps if they had understood and been taught the significance of moko, they could have been a source of pride, rather than something to simply cover up.

Then we had what was my personal highlight of our time with Robert. He withdrew a stunning pounamu mere, and handed it to us. Normally, you’d only be able to see one of these behind glass at a museum. Holding a centuries old mere in my hand, perfectly balanced, was an incredible gift. Upon being told that the name which translated into English meant jawbreaker, my jaw automatically began to ache at the thought of this weapon being near it. The power of it!

Our time with Robert and Adele ended with a homemade kai – the kawakawa tea and delicious shortbread went down an absolute treat. It was a perfect end to a fascinating afternoon, learning all about the history of a place where I’ve spent so much time. When I’m back this summer, I’ll be making sure I say kia ora to Motu-o-Kura when I spot her coming over the hill.

Our thanks and aroha to all involved in our visit.