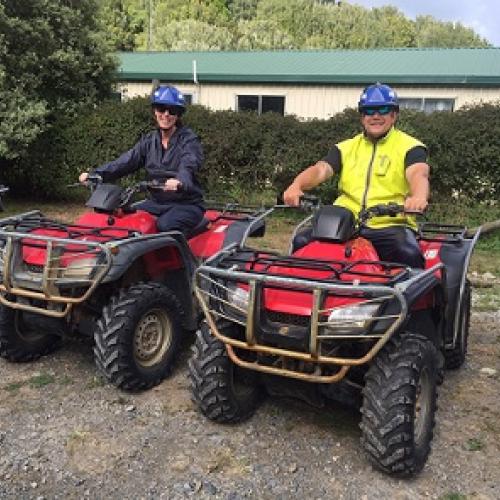 Christmas time is usually quite busy for most of us, but Rich and Tabitha McKenzie decided to make it even more so, when they took over Kāpiti Fourx4 Adventures a week before Christmas 2015.

They have been incredibly busy since, and when NZ Māori Tourism went to meet with them in mid March, it was the quietest couple of days they'd had since then - and that was with us being there in the morning and then an Irish family spending the afternoon with them.

Turning off State Highway One at Mackay's Crossing, we headed inland to the Akatarawa Ranges. There was no missing our location - a quad bike propped up on the water tank signaled we were in the right place.

Rich and Tabitha are living the dream out here - their young son Russell has pet tuna (long finned eel) in the creek, knows all the resident wildlife, and has over 18,500 hectares of bush on his doorstep to explore. Then of course, there are the many visitors that find their way to Kāpiti Fourx4 and soon find themselves feeling as though they're part of the whānau. 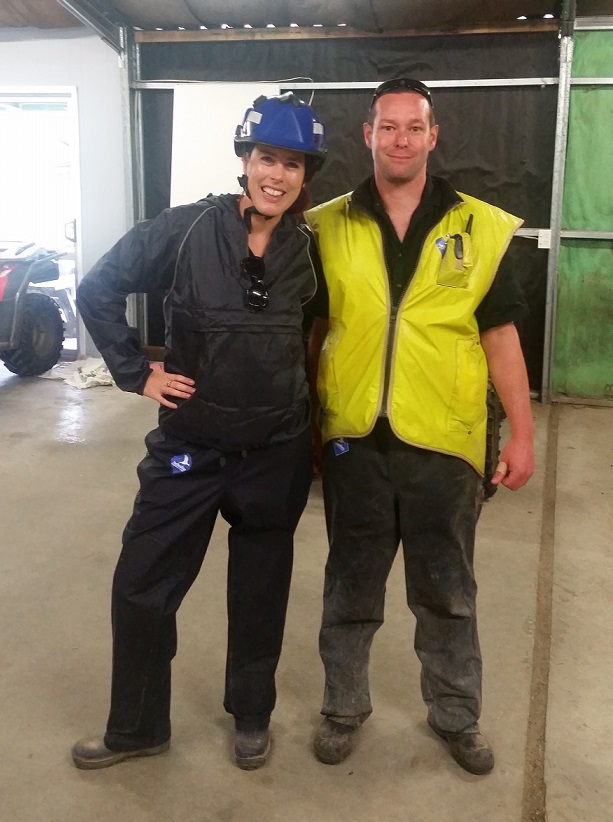 After fueling our stomachs for the ride, we were taken through to get ready - gumboots, over pants, jacket and helmet - before the obligatory photo shoot.

I will admit that I was quite nervous prior to getting on the vehicles but Rory soon allayed my fears. He very calmly and thoroughly went over everything I needed to know, made sure that I was feeling safe, and that I felt comfortable on the vehicle before we headed off to the practice track. Plus, I'd figured if 16 year olds could do it, I should easily be able to do it being twice the age!

I think Simon was a bit gutted that the riding order went Rory, myself, him and then Rich - it meant that he couldn't get up the speeds which I'm sure he wanted to - however, it was perfect for me as Rory would turn around to give me a thumbs up to check if I was doing ok, to signal what gear we should move the vehicles into, and to let us know when it was time to prepare for a photo op. 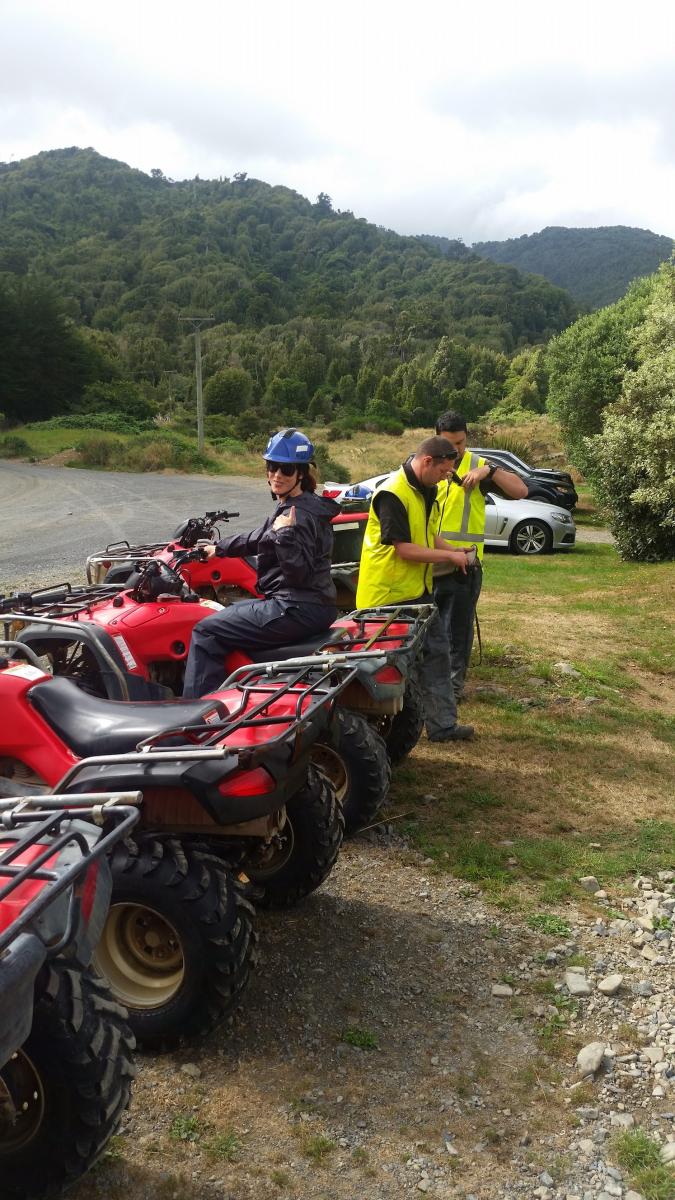 Honestly, the most nerve-wracking part of my hour on the vehicles was the short time spent at the start on the beginners track were we got a feel for our vehicles and learned how they behaved on the tracks. Once we conquered that and were up in the bush, it was pure bliss! The vehicles were used to the terrain and once I realised they are made to travel over rocky, uneven surfaces, I was able to fully enjoy myself.

About half way through our ride, Rory signalled to us to pull up. There was a decent stretch of flooded water ahead of us on the track and we were going to go through it - I think you can tell from the grin on my face how awesome it was!

Rory & Rich told us that because Wellington has experienced one of the best summers in years, the bush is a lot drier than it normally is. They highly recommended visiting in winter after some rain, when sloshing through the puddles that dot the track is a whole lot of muddy fun!

They took us to see a massive Rimu tree, which is estimated to be around 1,000 years old. It's incredible that it's still standing proud, considering a lot of this land was used for logging up until the 1970s - in fact, many homes in Wellington have been built using timber from this forest. 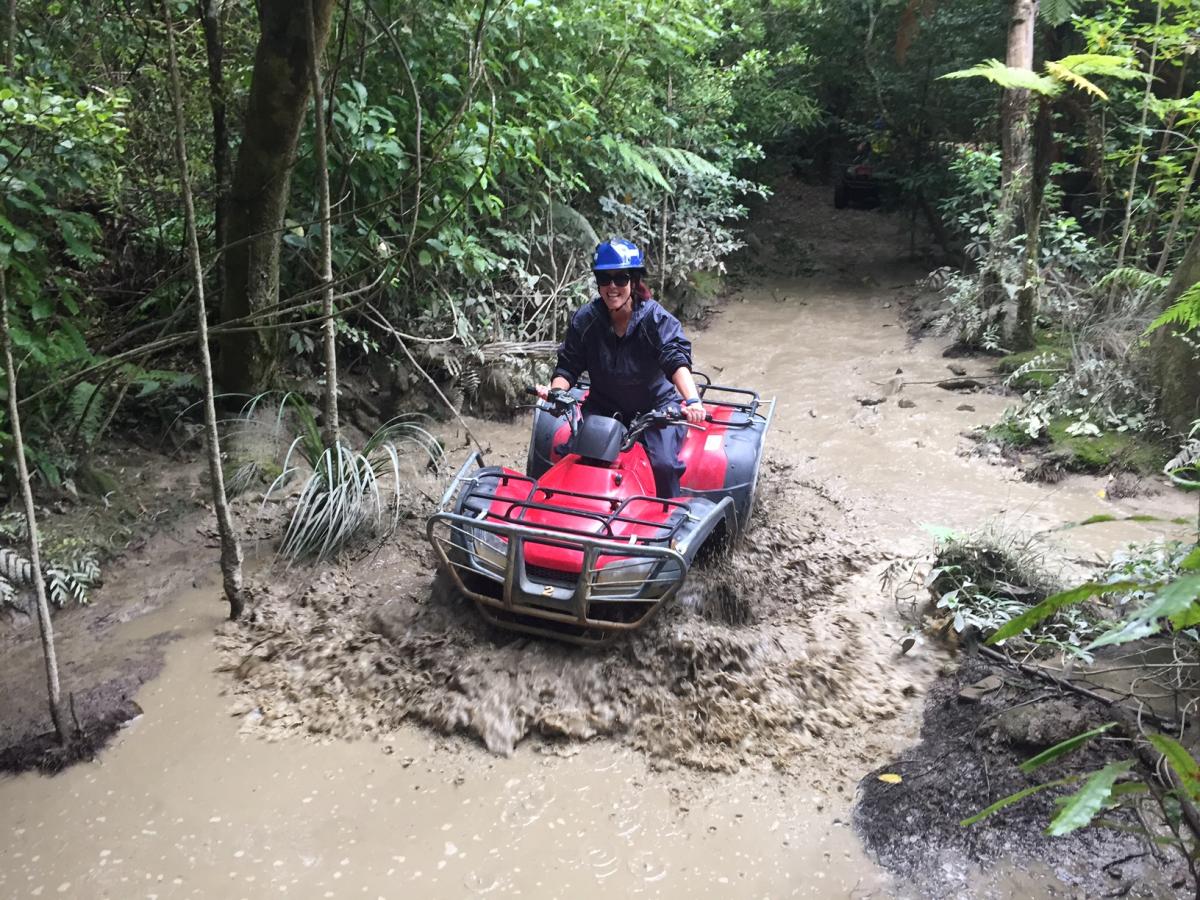 We received a call on the walkie talkie from Tabitha back at 'base' to let us know that the next group had arrived an hour early because they were so excited to get into it! There are a range of other activities available, and they were happily competing in archery when we arrived back.

The hour we had on the vehicles was a great introduction - we experienced maybe one per cent of the the 18,500 hectares of bush that Kāpiti Fourx4 have consent to use over our hour, so there is plenty more to discover!

Back at base we enjoyed looking over the photos that Rory had kindly taken for us on our cameras, while Rory took care of cleaning the vehicles and performing safety checks on them before the next group took them out. I know that they would have been in for an incredible few hours with the team, and come away from it with a huge grin on their face, a surge of adrenaline racing through their bodies, and a desire to get out there again. Well, at least that's how we felt!

Our thanks and aroha to Rich, Tabitha, Rory and Russell at Kāpiti Fourx4 Adventures.

Permalink Submitted by Renee (not verified) on Wed, 2017-03-15 11:30
Great article. Really complimented the company and was graphic and detailed about the type of activity that was provided. Sounds like positive guides and a committed business