Tea and Trout on the Ngaruroro

Tea and Trout on the Ngaruroro 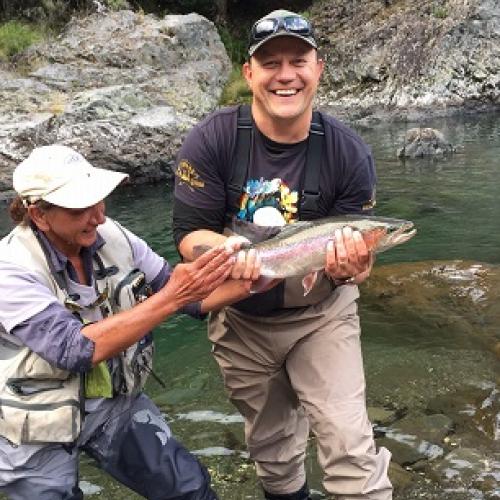 Pulling into Puketitiri Lodge, the home of One Cast Fly Fishing Adventures, after a five hour drive from Wellington to a warm, welcoming hug from our host and guide Marlene was exactly what was needed. That, and walking in to the kitchen to smell the delicious aroma of dinner bubbling away!

Over 14 years, Marlene and Craig Skeet have built One Cast Fly Fishing Adventures into one of New Zealand’s most successful fly fishing businesses, and one that has repeat international clients coming back each season for more. While NZMT were visiting, a Japanese client was staying who had been coming to Marlene for eight years, and this year had extended his stay from two weeks to a full month!

Marlene and Craig have extensive experience built up over years of living, eating and exploring in Hawke’s Bay’s rivers and bush. 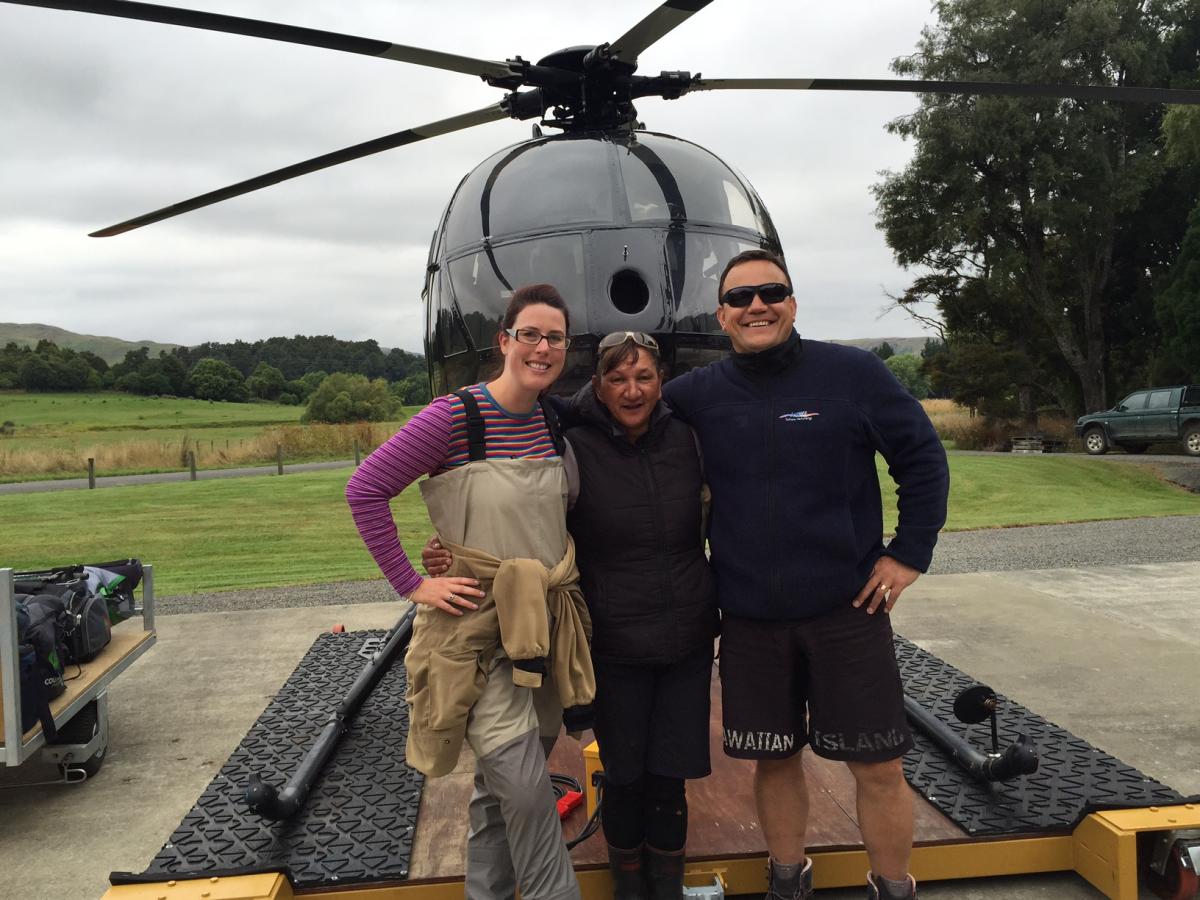 Our two days and nights in the Kaweka Ranges started with Marlene fitting us up with our waders and hiking boots (generally people bring their own, but thankfully for these two city slickers, Marlene was able to provide these), and sorting through our gear to make sure that only the essentials were taken into the bush, as due to taking a helicopter in, our weight limit was restricted.

Arriving at East Kaweka Helicopters, Marlene had given us a heads up on pilot Chris’ sense of humour, so we were well prepared with the two of them giving each other well-intentioned stick on our 15 minute trip into the Kaweka Ranges (I still maintain there was some sort of time sorcery on board, as the trip felt like it was only two minutes long). Marlene & Chris’ businesses are complementary, with Marlene’s clients taking advantage of the opportunities that Chris’ business offers to take them further into the bush in a few minutes, rather than tramping in to the same spot over several days!

Arriving at our remote spot that we were to call home for the next 28 hours, we stowed our things and brewed our first cup of tea with water from the river that was so pure, you could drink it as it was.

Marlene gave Simon and I a quick lesson in the fishing materials we’d be using over the next two days – as our time was limited,  we received the ‘speed version’ lesson, and learnt then practiced our techniques on the river. 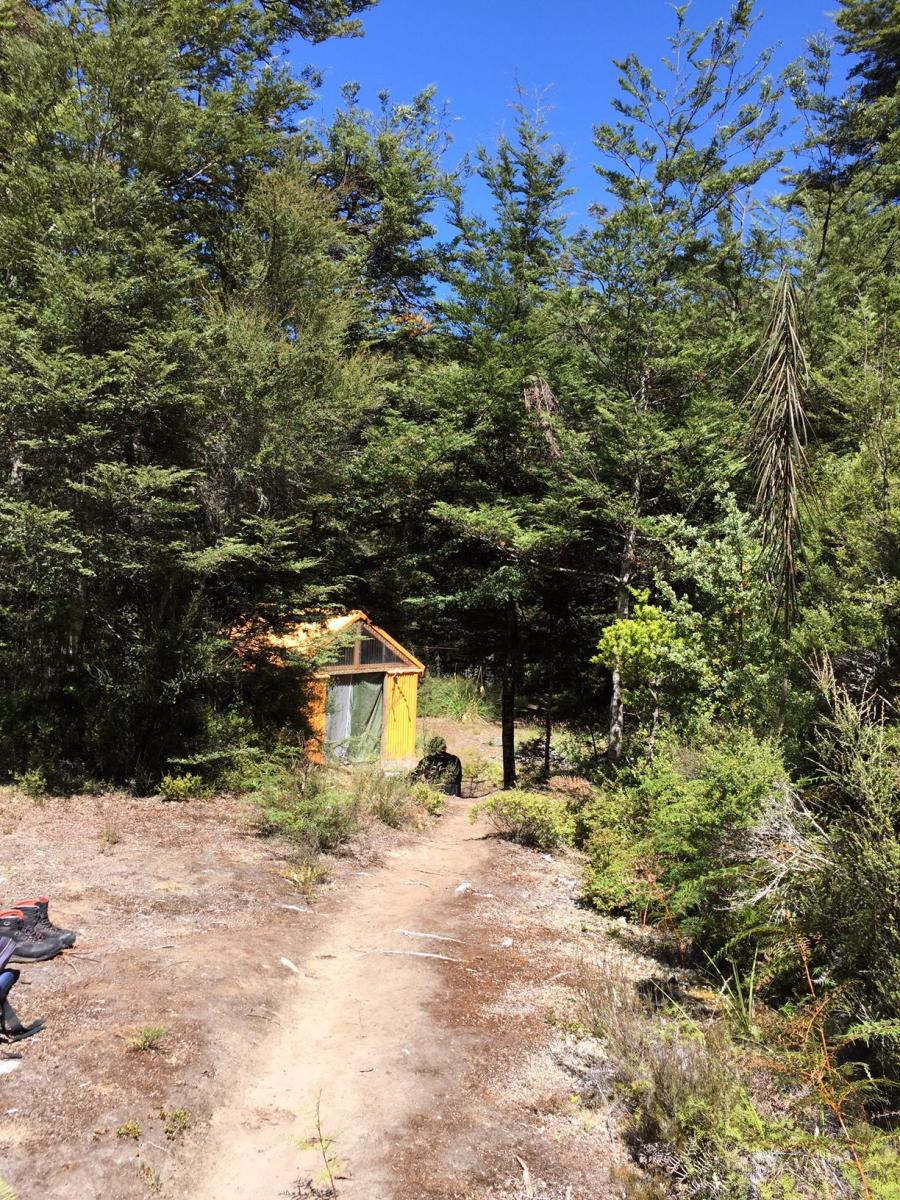 Then it was off up the river! I kept having to stop and pinch myself that we were here – the sun was shining, the cicadas were chirping, the birds were chatting away to each other, there was no-one else within miles of us, we had a clean river we could drink from, and we had the hope that the fish would be rising.

We followed Marlene’s sharp eye as she pointed out where the fish were (for the life of me I couldn’t distinguish them from the rocks, but that’s why Marlene is the guide and I’m not!) as we tried to lure them in with our dry-flies and nymphs (two words I didn’t know at the beginning of the week). I managed to eventually hook a trout but promptly got such a shock that I let it go! 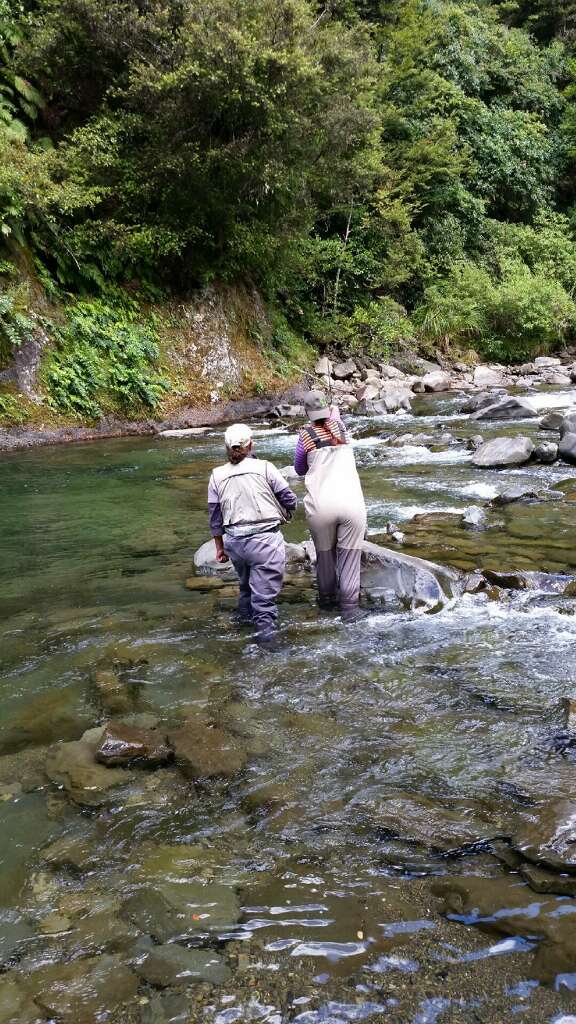 Our lunch stop was a filling meal of noodles, bacon and broccoli, cooked up on the riverside as we took in the solitude and the sensational view.

While we walked to our next fishing spots, Marlene filled us in on her history with the area, and how she came to be a guide – and one of the only Māori female guides for that matter. This area nurtures her – it provides food, water, shelter and protection. At the spot just down from our hut, we had our last fish for the night. I tried with the dry fly, before Simon had a go with the nymph.

SUCCESS! He’d hooked a a rainbow Jack trout! Marlene talked him through it so he could successfully land his own trout. Eventually he came to shore and Simon was able to get his photo with the trout, before we gently released him back in to the river.

We headed back to the hut for another cup of tea and to get dinner started. Sitting around the campfire, talking about life, with a red wine in one hand and a plate of hot mince and vegetables in the other, listening to the evening sounds of the bush – well, it was a pretty great way to end a spectacular day.

Marlene told us how she came to set up her business, and the clients she has focused on. When she first set up, a guide told her that the expectations of Japanese clients were very high and that you not only had to provide professional guiding services on the river but also high standards of accommodation and meal service. So Marlene made it her mission to win over the Japanese, and that she did. You only have to look at Itoh, as mentioned above, to see her popularity and why clients return to her year after year. 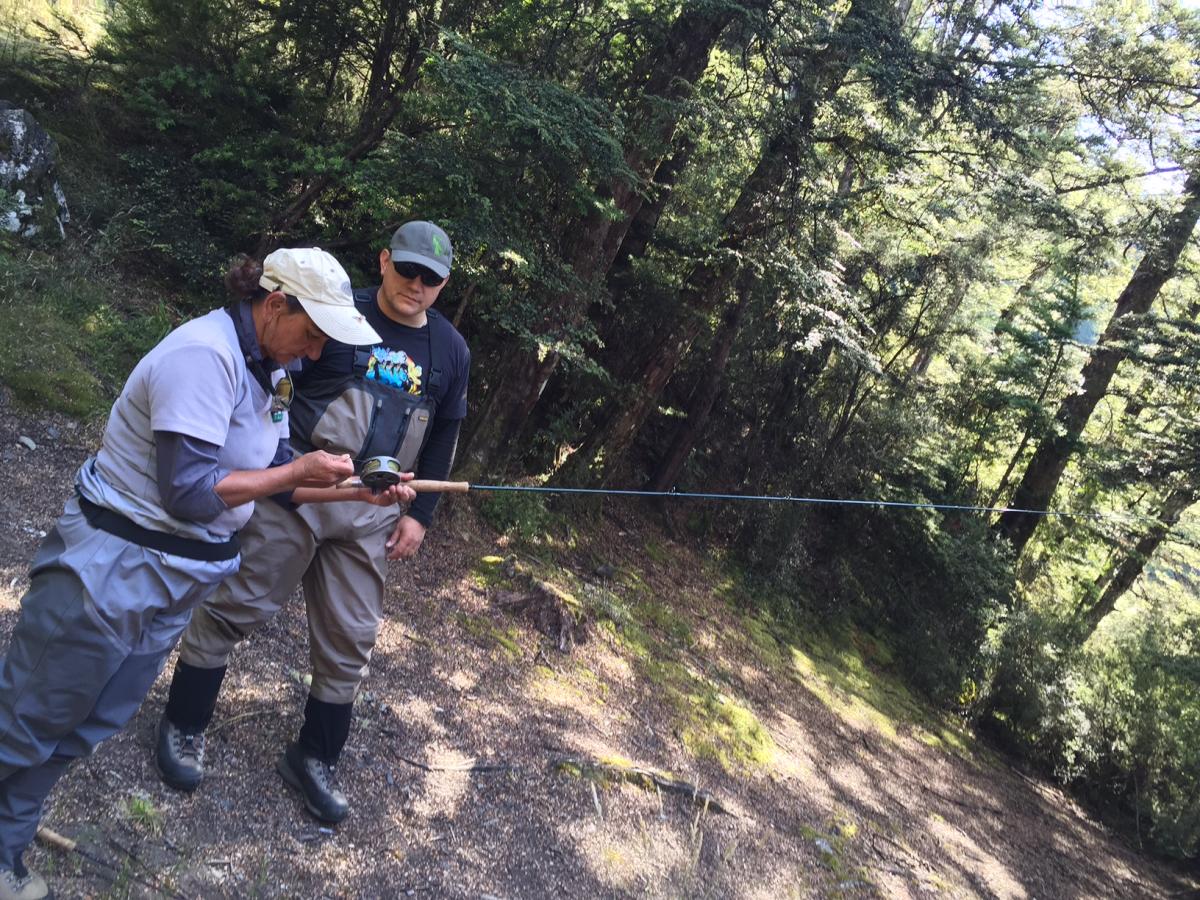 The business has expanded to not only include guiding, but also accommodation, Hawke’s Bay tours and fly-fishing lessons for kids and adults. Marlene is an ambassador for the land that she grew up in and which has given her so much in return – the love and respect she has for it is palpable.

Simon was very chivalrous when he offered to sleep on the floor of the hut to give Marlene and I the slightly raised sleeping platform. I think he may have regretted that later in the night when he heard the possums sniffing around outside!

The next morning after a hot breakfast (bacon and eggs for the win!), we headed down river to try our luck with the trout. With Simon having caught his the previous day, it was hoped that it would be my turn today.

The clouds parted and the sun appeared which meant the sunblock and insect repellent came out. Stopping at various pools in the river, I tried my hardest to convince the trout to take my bait but they just weren’t biting. I tried the different types of casting that Marlene had taught me, but still no luck!

After a quick lunch at the last pool, it was time to turn back as the chopper was coming in to pick us up at 1pm. At the pool just outside our hut Marlene spotted a fish and told me to go for it. I went for it but still no bite! It was almost looking up at me saying ‘next time Amy, next time’. So next time it shall be! 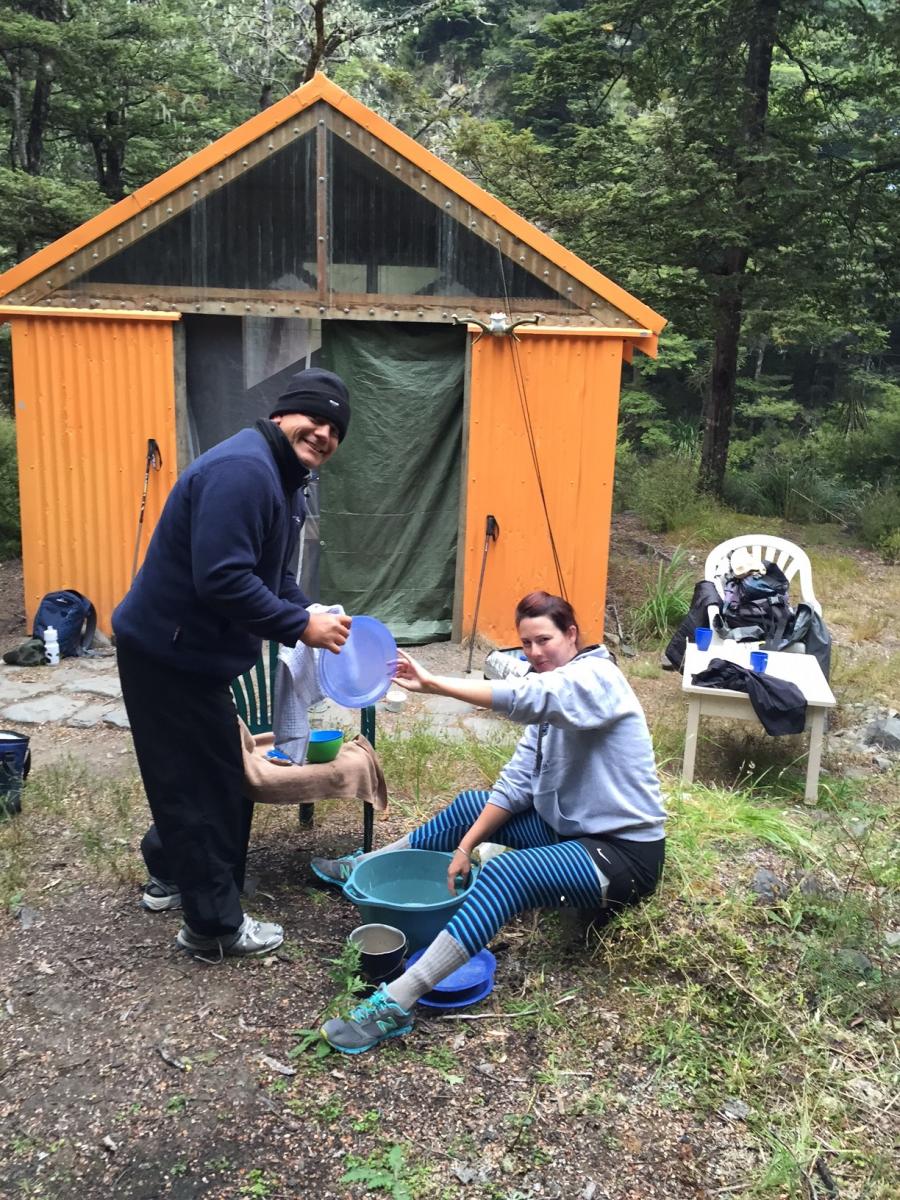 Waiting in the shade for Chris to appear in the sky, Simon and I talked about how lucky and privileged Marlene was to be able to be out here each week – to have this as her home. Thankfully for us, and the many visitors who come to see her each year, she has opened up her home for others to enjoy too.

Our aroha and thanks to Marlene and Craig for our stay. 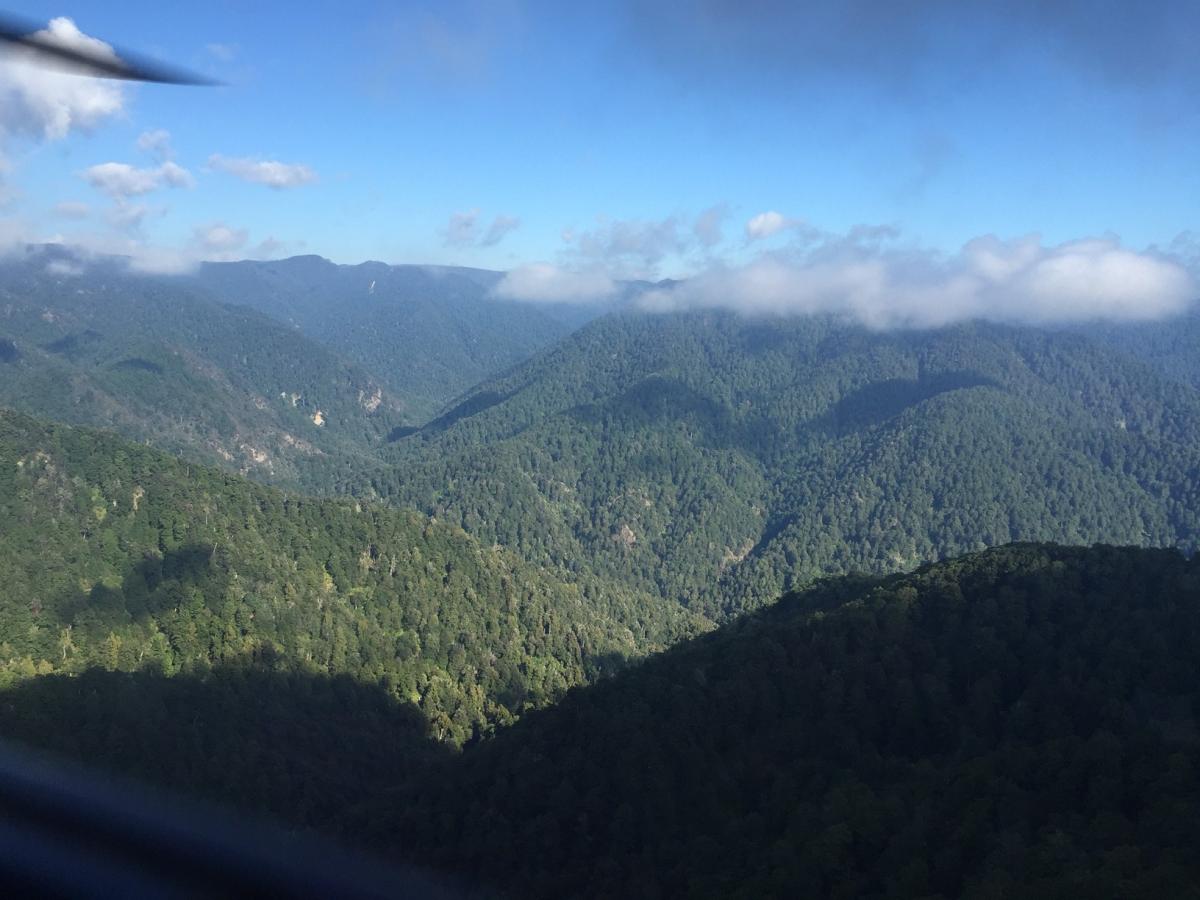 Director of Regions, Simon Phillips, and Communications Manager  Amy Hodgkinson were in Puketitiri, Hawke’s Bay recently to meet with One Cast Fly Fishing Adventures. New Zealand Māori Tourism pays for all our accommodation and experiences.