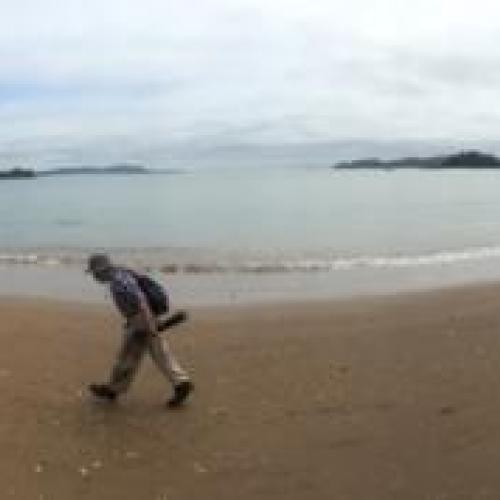 Manaakitanga. It's a word you'll often heard said in New Zealand. There are many ways to define what it is, but my favourite meaning is that it's taking care of people they way you'd take care of your family (and sometimes, even better!)

NZ Māori Tourism were in Northland recently for the launch of the QRC Tai Tokerau Resort College, and while driving from Auckland to Paihia, we came across a gentleman holding out his thumb just outside of Kawakawa with a sign saying 'Paihia'. Of course, we pulled over to pick him up.

During the following two days through a combination of basic English, Google Translate, and high-school learnt Japanese, we learned that Sakamoto san was 80 years old, and hitch-hiking around New Zealand on his own for three months. It was his first time leaving Japan in 50 years, and he had chosen New Zealand because he had heard it was safe.

Sakamoto san asked to be dropped at the local backpackers, but as we had a spare room at our hotel, we invited him to stay with us for the two days instead, before he continued on his way to Cape Reinga. 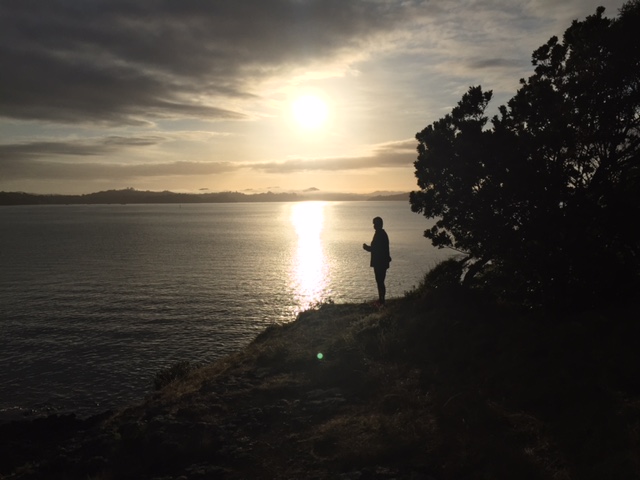 That evening, Sakamoto san bought his Japanese electronic dictionary to the table and we had a conversation around food, Northland, Māori, Japan and his family. The only Japanese I could recall from high school were greetings, numbers, and how to introduce myself - but it's incredible how far this actually got us in conversation! The next morning a couple of us were planning on getting up early to walk around Waitangi (this was before we realised the actual Treaty Grounds didn't open until 9am), and Sakamoto san agreed to join us.

If I'd had any misconceptions about age, they were soon shunted aside by Sakamoto san. He was there to meet us at 6.30am, with his trusty camera and tripod in hand, and pack on his back. We sound found that he had mastered the self timer shot - setting up his tripod and counting down the seconds until the shot was taken! We set off on our stroll - it was glorious having this gorgeous part of the country to ourselves as we explored for a couple of hours.

As we were walking back to the hotel we started to come across others who were out for a morning stroll. On hearing us greet them with 'Morena', Sakamoto san soon joined in and was greeting the locals cheerily with a Japanese-accented Morena!

That afternoon we were hosting some local students, teachers, career advisors and media on a guided boat cruise of the Bay of Islands - to show them the variety of roles that go into creating a tourism experience and that it isn't just those three employees who are on the boat with us. We asked Sakamoto san if he would like to join us too, and of course he said yes.

The crew at Fullers did a brilliant job of looking after us for those two hours - the Bay of Islands is a gorgeous . They were all intrigued by Sakamoto san, especially when they heard his story. What was made apparent though, is how difficult it can be to travel in New Zealand if your first language is not English. There are some businesses that have translations readily available, but it's the simple things - like safety instructions, or having a way that they can understand the stories that are being told in their own language - wouldn't that make their experience so much better? It was very cool to see the effort that everyone went to to communicate with Sakamoto san (again, bless Google Translate!) but this is something that we as both a tourism industry and a country need to figure out - how do we fully include those who have limited/no English?

Back at the Copthorne Bay of Islands, final preparations were well underway for the launch of the College. As we arrived back we at the hotel we had a super quick change and then it was time to greet the VIP guests that had arrived for the launch, including Ministers, MPs, Iwi leaders, School leaders, local Councillors, potential students, QRC Board member and staff, industry leaders, and more.

The launch went brilliantly - the vibe and energy from everyone in the room was phenomenal and everyone is excited for the opening of the College in April.

We introduced Sakamoto san and he turned out to be a very popular man - everyone wanted to talk to him, to hear his story, how he had found New Zealand so far, and where he was planning on heading next.

The amount of offers of accommodation and to host him in their hometown were numerous! But that goes back to manaakitanga - treating someone like you would family. It would have been easy for us to pick up Sakamoto san and then drop him at the backpackers without seeing him again. But both us and him received something from those two days spent together - we shared our cultures, our land, and our food.

We were fortunate that one of our guests was fluent in Japanese and able to do some translating for us at the function where we were able to find out much more about him and his life in Japan. This culminated in a fantastic story on One News, which had the added bonus of being the only story that reporter Helen Castles has ever done that has received only positive comments on the One News Facebook page!

What was even cooler was how many people on the facebook came together  - updates were posted over the next few weeks of people who had driven Sakamoto san to his next stop, who had shown him around their town, or shared a meal with him.

As the evening drew to a close, Sakamoto drew us aside to tell us in English that he'd had one of the best couple of days of his life and to thank us profusely for all we had done. That feeling that all of us had - that was manaakitanga.

Permalink Submitted by paula (not verified) on Mon, 2017-03-13 19:46
Kia ora, I have been directed to the New Zealand Maori Tourism page( homework for my tourism course) to write a comment on one of the blogs. Your story was captivating and endearing and i found myself smiling through the whole read. For you all to have extended your hand, time and heart to Sakamoto San will have given him memories and experience that money just doesn't buy. From the Bay of Islands cruise to the luncheon with distinguished guests he certainly experience New Zealand Tourism at its finest from 'the local'. You did yourselves and New Zealand proud. Ka kite ano